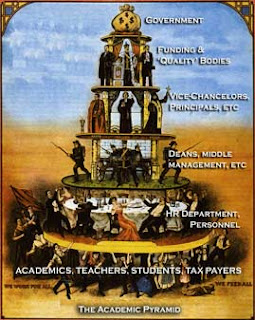 Erik Ringmar is Professor at the National Chiao Tung University, Hsinchu, Taiwan... Between 1995 and 2006 he taught in the Government Department at the London School of Economics.

'...This is the story of how [a]... blog suddenly became national news in Britain during the spring of 2006. It is also the story of freedom of speech and hypocrisy at a world-famous institution of higher learning...

On March 22, 2006, I gave a speech at the the Open Day events organised for prospective LSE students and their parents. Thinking about what to say in the morning, I panicked. As a foreigner, I don’t know anything about the English school system. In fact I don’t even know much about the LSE undergraduate programme. Yes, I have been at the LSE for some ten years, but I never bothered to learn anything about the various options, the requirements, the rules and the regulations.

Emailing George Philip, convenor of my department, I was told to rely on the official information they had provided. I was to be the “face” of the department and a “reassuring academic presence.” All that is needed, Philip told me “is someone who knows how to operate Powerpoint.”

This was bad news. What the event required was obviously someone with a sales pitch. Someone who could tell the official story of the School and the department the way it should be told, and convince prospective students to choose the LSE over any of its rivals. In a world where tuition fees are brining in 3000 pounds per student, academics are forced to become salesmen with Powerpoint presentations. How else, after all, can our salaries get paid?

In the end, I decided to give the speech, but to do it my way: to speak as truthfully as possible about what it is like to be an undergraduate student at an elite institution. The LSE is a great institution, surely it should be able to use the truth as a recruiting tool.

The speech in its entirety is available here: It is basically a short catalog of the good and bad things that undergraduate students have told me about the LSE over the course of the years. Yes, I did mention that undergrad teaching comes very far down on the list of priorities of most LSE academics; I did say that teaching alone never will give you a promotion; and I did say that the in-class experience of LSE students differs only little from the in-class experience of students at lesser universities. As it turns out, I happen to believe that this is the truth.

...This was not good enough for the LSE authorities. An administrator with responsibility for undergraduate recruitment who was present during the speech denounced me to her boss, and before long the boss had been in touch with George Philip. An investigation was quickly put together and witnesses called. What I had said, Philip argued, “departed from the prepared message”; I had “embarrassed colleagues and discouraged prospective undergraduate students from applying.”

...Meanwhile, I had been blogging about the whole business. I started Forget the Footnotes in January 2006. During the first couple of weeks of its existence the blog had perhaps ten visitors per day ― family mainly and a few students with too much time on their hands. The topics varied. I wrote about things I was reading and thinking, and about events that occurred in my life. Some entries were confessions, other boasts; I tried to be thought-provoking, I tried to be funny. Of course it was all very self-promotional.

Occasionally I blogged about the LSE. I lamented the fact that political science increasingly seems to be taken over by statisticians and by rational choice theorists. I poked fun at colleagues who try to predict the timing of ministerial resignations and those who have 70 research papers on the European Parliament. I reflected on the role of expert knowledge in social development and I concluded that an expert-producing institution like the LSE had much to answer for when it comes to problems in developing countries. I pointed out that the vast majority of professors in my department are English and that the majority of junior faculty are non-English. What, I asked, can account for this discrepancy? Could there be some kind of ethnic discrimination at work?

Regardless of the topic, I was fascinated by the new powers the blog had given me. For the first time, I had access to a medium through which I could speak in public, in my own time and my own manner, without the interference of editorial filters. Since the Enlightenment, people in Europe have claimed to believe in free speech, yet the right to speak has always been restricted to a privileged few. Only people with privileges have had access to a newspaper column or a TV channel. Internet technology and blogs are changing all this. Now for the first time everyone with a connection has access to a world-wide audience. The question is whether people of power and privilege will be in favour of freedom of speech also under these circumstances.

As far as the LSE is concerned, the answer soon became obvious. George Philip wrote me an email on March 24, 2006, in which he reprimanded me for the Open Day speech and for maintaining a blog.

The blog, he said, “makes statements that are enormously damaging to your own reputation … and potentially damaging to the School.” For now, Philip hoped, an “informal oral warning” would be enough, together with my agreement to 1) “destroy/cancel your blog entirely and shut the whole thing down until further notice,” and 2) “when representing the School in the future, doing so in a positive way that does not risk bringing the School into disrepute.” Philip also asked me to apologise to a long list of people.

At a loss for what to do, I emailed the colleagues in my department. The big professors got back to me quickly and publicly and they agreed with the convenor. Clearly, they concluded, I had overstepped the line and clearly there can be no such thing as a general right to blog. A few junior colleagues got back to me privately with statements of support. They didn’t agree with what I had said, they declared, but they defended my right to say it. Meanwhile most of my colleagues simply kept their heads down. Why risk the chance of a promotion? Most issues are complicated, freedom of speech must have limits …

There is no official LSE policy governing blogging for student and staff. However, the School’s “Code of Practice on Free Speech” incorporates explicitly the Universal Declaration of Human Rights of the United Nations, 1948:

“Everyone shall have the right to freedom of expression; this right shall include freedom to seek, receive and impart information and ideas of all kinds, regardless of frontiers, either orally, in writing or in print, in the form of art, or through any other media of his or her choice.”

In fact, as the same LSE Code makes clear:

“Action by any member of the School or other person contrary to this Code, will be regarded as a serious disciplinary offence and, subject to the circumstances of the case, may be the subject of proceedings under the relevant disciplinary regulations, as promulgated from time to time.”

George Philip and Howard Davies are clearly both in violation of this code. They both denied me my academic freedom and they both sought to close down my blog. These are regarded as “serious disciplinary offences” by the LSE’s own rules! At the same time, as numerous people inside the School assured me, there is no point in trying pursuing the issue legally. What LSE committee would ever go after a convenor or the director of the School itself? Don’t be naive!

Eventually George Philip seems to have realised that he had no legal leg to stand on. First he sent me a message saying that I could put my blog back up again but only once he had given me permission. A few days later he grudgingly acknowledged that I had the right to maintain my own blog on my own web-space.

Instead of trying to close down the blog, they tried to dig up dirt on me. Clearly they were preparing some kind of process. A well-informed source assured me that George Philip was convinced I had gone clinically mad, and rumours to that effect were circulating in my department. One day a motorcycle courier delivered a confidential invitation to go on a medical leave. Needless to say I declined. One of my teaching assistants reported:

You might be interested to know that I recently received an email from [the Government Department] asking me the way to provide them with feedback about the way you were supervising undergraduate teaching (how often you met with me, whether you monitored me, etc.). I don’t know if it is a regular procedure or a way of trying to intimidate you, but I made sure that nothing of what I replied could be held against you.

This kind of intimidation is threatening. Neither George Philip nor Howard Davies have retracted their threats and I have not been given an apology. I am still under surveillance. There is one computer at the LSE that has checked out my blog over 850 times, and there are several other computers that have clocked up many hundreds of hits. These could of course be fans, but somehow I doubt it...

There is much to be learnt from this story. I draw the following conclusions:

Posted by Pierre-Joseph Proudhon at 8:16 PM

It is the shame of academic colleagues who conspire with bullies out of self interest that supports bullies in exerting their pathetic power....the psychology of those silent witnesses is deeply troubled

Indeed. And when confronted these colleagues in a formulaic and predictable way will quote their job security, their house morgage, etc, etc... fear rules. In reality they are the potential next target /victim. They are damned if they do and they are damned if they don't. The whole situation is sick. A healthy environment should allow them to express their opinion. Where staff are scared to speak out, one can recognise a sick environment... a toxic environment...

This is a different case of corruption in academia, but can you please publicise it. A superviser stole her student's work and damaged his life
http://ca.geocities.com/uoftfraud/