Support floods in for Steven Salaita

Bill Mullen, a professor of English and American Studies at Purdue University and one of the organizers of the effort to get the American Studies Association to vote to honor the academic and cultural boycott of Israeli institutions, reports on the tide of support for a pro-Palestinian professor fired by the University of Illinois at Urbana-Champaign. 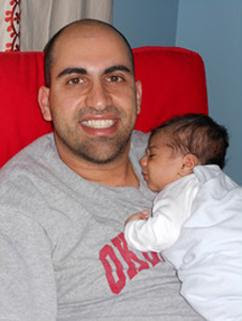 Steven Salaita poses with his child

A MASSIVE public campaign in support of fired pro-Palestinian and Arab-American scholar Steven Salaita has now generated more than 15,000 signatures calling for the University of Illinois at Urbana-Champaign to reinstate him. More than 2,000 faculty from around the world have signed pledges to boycott UIUC until Salaita is given his job back.

But Salaita has not been offered his job back, and his status remains uncertain.

On August 1, Salaita received an e-mail from UIUC Chancellor Phyllis Wise saying that his job offer to become an associate professor of American Indian Studies was not likely to be approved by the University of Illinois Board of Trustees.

Salaita had already signed an offer letter--the equivalent in academia to an employment contract--to take the position as of October 2013. He sold his home in Virginia, where he was associate professor at Virginia Polytechnic University, and was in the process of moving with his family, including his two year-old son, when he received Wise's notice.

Salaita was fired after the Daily Caller and the News-Gazette newspapers in Champaign-Urbana published articles that included criticisms of Salaita's twitter posts opposed to Israel's Operation Protective Edge massacre in Gaza.

What you can do
Sign the change.org petition demanding that Steven Salaita be given his job back. You can also write a letter of support for Salaita to the University of Illinois Board of Trustees at change.org.

Send an e-mail expressing your support for Steven Salaita to UIUC Chancellor Phyllis Wise. Copy your e-mail to the chair of American Indian Studies Robert Warrior.

After Israel began its bombing campaign on Gaza in July, Salaita, who has written several books on Arab American literature and one critical of Israel state policy, tweeted his outrage at the loss of Palestinian life.

In an article published first at Mondoweiss, Phan Nguyen carefully examined Salaita's tweets, showing that Salaita was not only consistent in his criticism of Israeli state policy, but he had a long record of criticizing anti-Semitism. Nguyen documents his contention with numerous examples, including this tweet, for instance: "I refuse to conceptualize ‪#Israel/‪#Palestine as Jewish-Arab acrimony. I am in solidarity with many Jews and in disagreement with many Arabs."

Nguyen's article also pointed out that Salaita critics like Cary Nelson had both misused and misinterpreted Salaita's twitter posts to accuse him of anti-Semitism. Nelson is a longstanding backer of Israel and critic of the boycott, divestment and sanctions (BDS) movement against Israel. University of Illinois Chancellor Phyllis Wise has also criticized BDS.

It is no coincidence then that Salaita has been fired for supporting the Palestinians and criticizing Israel.

More on this at:  http://socialistworker.org/2014/08/19/support-floods-in-for-steven-salaita
Posted by Pierre-Joseph Proudhon at 4:48 PM No comments:

Whistleblowers in universities can hit the national headlines for shining light on issues of public interest, only for their careers to end up in very dark places.

Some of higher education’s most prominent whistleblowers paint a bleak picture about the impact on their subsequent careers. They talk about being persecuted by colleagues after coming forward. But even after leaving their jobs, some believe they still suffer a legacy. One talks about being “effectively blackballed” from ever working again in higher education.

For other whistleblowers, exile is self-enforced. “It has damaged my career. But I’m not really sure I wanted a career by the end of it…There were so many people in prominent leadership positions who behaved so appallingly, I just couldn’t carry on within the profession. I just felt sick about the whole thing,” says Aubrey Blumsohn, who left his post as a senior lecturer in metabolic bone disease at the University of Sheffield, after raising concerns in 2005 about research on a drug made by Procter & Gamble, a funder of research at Sheffield.

But others point to cases where whistleblowers highlight wrongdoing, their concerns are investigated responsibly by universities and their working lives continue as normal.

David Lewis, professor of employment law at Middlesex University and convener of the International Whistleblowing Research Network, argues that the media only report cases “where things go pear-shaped”, as the nature of successful whistleblowing means that it remains within institutions and never emerges in public.

Lewis says that his anecdotal evidence suggests there is “quite a lot of successful whistleblowing that goes on in universities”.

Nevertheless, when things do “go pear-shaped”, the impact on people’s careers can be shattering. Those cases may offer lessons to learn, for both universities and prospective whistleblowers...

Read the rest of this lengthy article at:
http://www.timeshighereducation.co.uk/features/life-after-whistleblowing/2014776.fullarticle

Posted by Pierre-Joseph Proudhon at 11:36 AM No comments:

A head of department at Imperial College London has dismissed complaints made against him of bullying as a conspiracy to oust him from his position and replace him with his deputy.

Philippe Froguel, head of the department of genomics of common disease at Imperial, made the claim last week during cross-examination at an employment tribunal case brought by Robin Walters, a former researcher in the department.

Dr Walters, who is now a senior scientist at the University of Oxford, was dismissed by Imperial at the end of 2011 after he refused to work under Professor Froguel any longer.

Dr Walters is claiming unfair dismissal, as well as victimisation, harassment and discrimination, and alleges that various abusive encounters with Professor Froguel during 2011 – including one during which he claims he was shouted at for being autistic – had left him suffering from acute adjustment disorder, which results in feelings of depression and anxiety.

Dr Walters is married to Alexandra Blakemore who, at the time, was a reader and Professor Froguel’s deputy. She also lodged complaints of victimisation, harassment and discrimination against Professor Froguel, but her case was settled before hearings began. She is now a professor of human molecular genetics in Imperial’s department of medicine.

At the hearing, Professor Froguel said he had regarded Dr Walters as his friend, whose recruitment he had spearheaded and for whom he had been determined to secure a permanent lectureship. An opportunity to bring in the necessary funding to achieve this had arisen in 2010, when Imperial was invited to participate in a European Union-funded project, known as Imidia, to improve diabetes treatment.

He told the hearing that he had occasionally been “hard and abrasive” towards Dr Walters, such as when he made the remark about autism. “But 99 per cent of the time I have been extremely gentle,” he said, adding that no one had complained about him in the past two and a half years.

The tribunal heard that three other members of junior staff at Imperial made complaints about Professor Froguel’s behaviour in the summer of 2011. It also heard that a faculty review in 2011 concluded that his management had sometimes been “tactless and direct” and that a human resources manager reported he had been warned to take a “gentler” approach.

But he attributed this glut of complaints in 2011 to a “conspiracy”. “They were a gang headed by [Professor] Blakemore [whose aim was] to have me sacked or put on sick leave or sabbatical and [for her] to take the lead as acting head of department,” he said.

From: http://www.timeshighereducation.co.uk/news/imperial-employment-tribunal-conspiracy-claim/2010712.article
Posted by Pierre-Joseph Proudhon at 11:30 AM No comments: