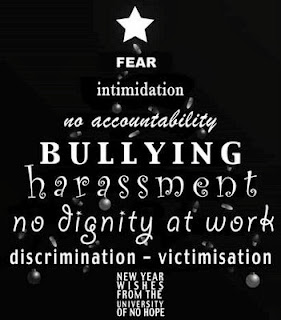 Bullying isn't only a problem that occurs in schools or online among young people. It can happen anywhere to anyone, and a Rutgers-Camden nursing scholar is shedding some light on how it is becoming increasingly common in academia.

"What worries me is the impact that bullying is having on the ability to recruit and retain quality educators," says Janice Beitz, a professor at the Rutgers School of Nursing-Camden. "It has become a disturbing trend."

Beitz is a co-author of "Social Bullying in Nursing Academia," an article published in the September/October 2013 edition of Nurse Educator that draws upon interviews conducted with 16 nursing professors who were the victims of social bullying in an academic nursing workplace. Beitz says that the participants described in detail instances in which they were slandered, isolated, physically threatened, lied to, or given unrealistic workloads, among various other bullying tactics.

The participants in the study were primarily non-tenured female faculty teaching in baccalaureate programs throughout the Unites States.

"We don't know how widespread this is, but it exists," says Beitz, who says she was bullied in her career. "Not many people look at bullying in the academic environment. We wanted to raise awareness of it."

In the study, Beitz notes that in the most common cases of bullying, academic administrators are targeting faculty, but in some cases, faculty are bullying other faculty members or their administrative superiors.

Bullies may be threatened by a fellow academic's qualifications and scholarship, or victims may be targeted because they are perceived as weak, Beitz says.

"The bully can make life miserable for the target," she explains. "That's because in an administrative role, a bully has the power to make decisions about the target. Part of it is the unique nature of higher education. The tenure process is different than any other environment. Administrators in academia have power over colleagues, and sometimes that power causes them to bully their subordinates."

Beitz says bullying victims will often blame themselves for the actions of a colleague and she says sometimes the only thing a victim can do is leave the environment altogether, which can dissuade nurses from pursuing careers as educators.

"Institutions need to have good faculty who are experienced clinicians and researchers. That doesn't happen in a bad bullying environment," she says. "If I hadn't had support from fellow faculty, I would have left education. I wouldn't have wanted that to happen. I've enjoyed my career. I feel like I've had an impact on a lot of wonderful graduates who have gone on to have great careers. People want to feel valued. That's why it's important to serve the people you work with and employ a collegial, positive environment."

Beitz is now working on a follow-up study on resilience and how victims are surviving when bullied. Additionally, since her bullying study does address the prevalence of bullying in nursing academia, Beitz hopes to cast a wider net and perform a quantitative study on the issue nationwide. Beitz's co-authors on "Social Bullying in Academia" were La Salle University nursing professors Earl Goldberg, Ciara Levine, and Diane Wieland.

Putting any lack of investment in staff development, strategies that exist to promote cronyism, incompetence, favoritism, and inequality, and to disguise management failures, Imperial College is a place where internal grievance procedures are used selectively by managers - against staff, with most senior managers untouchable and no accountability or transparency in any decision making process. If any complaints ever reach the surface those are ignored and the staff are victimised and penalised in such a way so that they serve as a lesson for others. Fear prevails among a silent majority, over-managed or under-managed according to senior staff needs. The working environment is toxic.

Why the Gifted Are at Heightened Risk

...A review of the literature by Zapf and Einarsen (2005) suggests that individuals describing themselves “as more achievement-oriented and as more conscientious than their colleagues” (p. 253) are more often mobbing targets. The (D.) perfectionism that is a virtue of the highly gifted individual is (A.) misunderstood by others, whereas for the gifted individual this is but an expression of his or her (D.) estheticism in the same way that a perfect diamond’s refraction of light is also beautiful. Colleagues will know that their work does not stack up by comparison, and they will need no one to tell them so. The gifted individual’s perfectionism and estheticism are seen as a threat, even if the gifted individual does not speak about them and does not offer criticism of others. A highly gifted adult cannot obscure his or her presence in such a milieu even through innocuous behavior. Such a presence will become and remain a recognized social fact because gossip, malicious and otherwise, will establish it as such. This malice will enforce the gifted adult’s social isolation, probably also intensifying his or her search for the meaning of that social isolation. Highly gifted adults’ (A.) difference from others, exacerbated by (A.) others’ misunderstanding of this difference, offers less capable colleagues the opportunity to establish by rumor and innuendo other socially recognized “facts,” to the detriment of the gifted person, whether those “facts” are actually true or not.

It is unhappily the case that there are not always enough places in superlative organizations to house the number of highly talented and gifted individuals who merit such positions. At institutions less than first-rate, therefore, one characteristically finds a small number of highly talented individuals who merit placement at a truly first-rate institution, surrounded by a rather larger number of less talented individuals who know that they could never reasonably aspire to such a position. The latter will typically compensate for their sense of inferiority by seeking ego-satisfaction through the acquisition of institutional power and prerogative. This power they will then tend to employ to make others’ lives hell, often targeting highly talented colleagues whose greater abilities evoke their own deep-seated insecurity.

Einarsen’s (1999) research on “predatory mobbing” (i.e., cases where the victim has not acted in any provocative manner that might justify the behavior of the predator) gives examples of the foregoing destructive cycle. Stucke’s (2002, cited in Zapf & Einarsen, 2005, p. 251) study establishes empirically that “active mobbing behavior [is] highest for a group high in narcissism but low in self-esteem stability, [as this group’s] individuals had to stabilize their high but unstable selfesteem by treating other individuals negatively.” In other words, inflated but weak egos need to beat down genuine quality in others. This is a “textbook description” not only of the organizational culture of the institution where I worked but indeed of the cultural syndrome of the whole broader social milieu of which the institution is characteristic. Zapf and Einarsen (2005) explain how such a dynamic develops on the microsocial level:

This group of victims was certainly [D.] not among the least efficient employees in the organization. Their problem was that they clashed with the norms of the work group to which they belonged. It is likely that in this case, the victims’ [B.] conscientiousness went against a group culture characterized by rigidity and low tolerance for diversity. These victims were probably perceived as constant annoyances or even threats to the work group to which they belonged. As a consequence, the group may have started to harass these individuals, either to enforce conformity or to get rid of the person. (p. 254; emphasis added)...

From: http://arts.uwaterloo.ca/~kwesthue/Kotleras-mobbing2011.pdf
Posted by Pierre-Joseph Proudhon at 1:29 PM 4 comments: