The Seriously Free Speech Committee is a Vancouver (B.C., Canada)-based group mandated to defend freedom of speech specifically in relation to issues of Palestinian rights or the criticism of Israeli policies. We write in support of Dr. Terri Ginsberg, whose credentials for a tenure-track position at NCSU were discounted in 2007-8 because of her expressed or implied political views. We are aware that the university’s legal counsel advised offering Dr. Ginsberg a grievance hearing, but that your predecessor as chancellor, supported by your Board of Governors, denied her this opportunity to seek a remedy.

This miscarriage of justice—devastating for the victim—is especially deplorable in light of the apparent praise given recent “Arab spring” events at the start of your 2011-2012 report (available online). The censorship of principled teachers like Dr. Ginsberg can only be seen as complicity in the continuing oppression of an already oppressed people in the Middle East, the Palestinians, with whom Dr. Ginsberg apparently expressed sympathy.

We are aware that Dr. Ginsberg has sought remediation through the courts. While it is not within our purview to address the court, we urge you to correct your predecessor’s mistake: to grant Dr. Ginsberg the grievance hearing she deserved and to offer her a substantial financial settlement to offset the financial hardship she has suffered as a consequence of the university’s apparent refusal to open itself to the play of ideas that should define higher education.

Even better would be to offer her the tenure- track position for which her department evidently considered her well qualified until the question of her politics arose. This is not the way for any university to establish a sound academic reputation, and we hope that you will see your way clear to set right, as far as it lies in your power, the injustice committed against Dr. Ginsberg.

Yours sincerely,
Sheila Delany for SFSC
Posted by Pierre-Joseph Proudhon at 7:50 AM No comments: 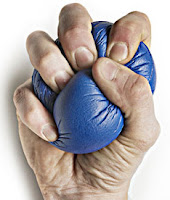 Several surveys into occupational well-being name academics as one of the most stressed professional groups. Join our live chat, Friday 15 June, to explore how to manage academic stress.

Enter the words "academic stress" into any search engine and most of the articles and resources shared focus on helping students while they are at university. I know full well that higher education can be an assault on the senses, and most students will need help with a whole range of issues at some point, but how much support is there for those who make up the other part of academia, the staff of an institution?

There's evidence that support for academic staff is needed. A 2008 report from the University and College Union (UCU) revealed that most universities were failing to meet the standards for psychosocial working conditions set out by the Health and Safety Executive...

More info and details at:
http://www.guardian.co.uk/higher-education-network
Posted by Pierre-Joseph Proudhon at 10:25 AM No comments:

The Perception of Postgraduate Students With Regard to Workplace Bullying

The main objective of the study includes the analysis of the experiences of postgraduate students regarding workplace bullying. These postgraduate students are employed in various business industries in South Africa. This study highlights the seriousness of workplace bullying. Actions need to be taken by all parties concerned to ensure that workplace bullying is adequately addressed in workplaces through policies and procedures, and by legislation. Until these changes are made, workplace bullying will continue to be a costly problem for employers and employees. An NAQ-R (Negative Act Questionnaire Revised) instrument is designed and employed to evaluate exposure to workplace bullying. The questionnaire elicits personal derogation (humiliation and personal criticism), work-related harassment (withholding of information and having one’s responsibilities removed), social isolation, physical violence, and intimidation and work overload. The research evidences that people do not recognise bullying when they experience it or do not realise when they are being bullied. The behaviour is hidden and trivial criticisms and isolating actions occur behind closed doors. In addition, professional people are too afraid to admit that they are being bullied. Interestingly, they are embarrassed, blame themselves and fear that the phenomenon would escalate.

...The self-righteous bully is a person who cannot accept that they could possibly be in the wrong. They are totally devoid of self-awareness and neither know nor care about the impact of their behaviour on other people. They are always right and others are always wrong. R. Namie and G. Namie (2009) described bullies as individuals who falsely believed they had more power than others did. Bullying seems not connected to gender (Peyton, 2003, p. 39). Peyton (2003) listed the following common characteristics of bullies:

(1) They are quicker to anger and sooner use force than others;
(2) They tend to have little empathy for the problems of the other person in the victim/bully relationship;
(3) They often have been exposed to models of aggressive behaviour themselves and chronically repeat the behaviour;
(4) They inappropriately perceive hostile intent in the actions of others;
(5) They focus on angry thoughts and are revengeful;
(6) They see aggression as the only way to preserve their self-image;
(7) They need to control others through verbal threats and physical actions;
(8) They exercise inconsistent discipline procedures at home;
(9) They perceive physical image as important for maintaining a feeling of power and control;
(10) They suffer physical and emotional abuse at home and have more family problems than usual;
(11) They create resentment and frustration in a peer group;
(12) They exhibit obsessive or rigid actions;
(13) They distort truth and reality and blame other people for errors;
(14) They are charming in public;
(15) They tend to be very insecure people and take credit for other people’s work;
(16) They do not want to hear the other side of the story.

The workplace bullying is a person with a history of aggressive behaviour. Their repetitive behaviour becomes habitual, which grows into a way of life, and in the case of the bully, it becomes the chosen method of relating to other human beings. This behaviour is harmful, destructive and often illegal (Lines, 2008).

One can perceive through the research done in the empirical study that people do not recognise bullying when they experience it or realise when they are being bullied as the behaviour is covert and trivial criticisms and isolating actions occur behind closed doors. What one person may consider to be bullying, another may not and this makes the management of the problem difficult. Bullying and harassment cases are not clear-cut and sometimes people are unsure whether the way they are being treated is acceptable or not. Another problem identified through research done is that many highly professional people are too afraid to admit to anyone outside or even to themselves that they are being bullied. They are too embarrassed and afraid that it would escalate or that it might even be their fault...