Bushwhacked at work: a comparative analysis of mobbing & bullying at work 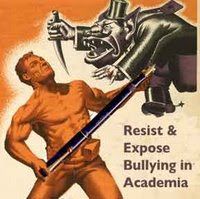 Mobbing is a system built on the interaction of key elements which all play measurable roles, relating to and reinforcing each other. The elements include: the psychology, personality and circumstances of the mobbers and victims, the organizational culture and structure, the triggering event, the underlying conflict and even factors outside the organization (Davenport et al.,1999).

Kenneth Westhues (2007) is a professor of sociology at the University of Waterloo who has written a five-volume series about mobbing in academe and frequently visits university campuses to collect data and lecture on episodes of mobbing. With his research centering on the college environment, he concludes that mobbing occurs most in organizations where the workers are secure in their jobs, there are subjective measures of performance, and where there is frequent tension between the loyalty to the institution and its goals and loyalty to higher purposes or individual goals (Gravois, 2006). Hundreds of Leymann’s case studies show mobbing and bullying are usually found in work environments that allow poorly organized production and working methods and are with inattentive or uninterested management (Vandekerckhove, 2003).

Mobbing and bullying occur in all kinds of organizations. However, research shows that in the non-profit sector, as well as in the education and health care industry, mobbing is more prevalent than in private companies. According to Westhues (2006-3), college and university campuses are perfect breeding grounds for the culture of mobbing. This is further supported by Leymann’s (1996) study that found a disproportionate percentage (14.1%) of mobbing victims in schools, universities and other educational settings. The high job security, subjective performance evaluations and frequent tension meet the criteria for an atmosphere of mobbing. In his classes at Waterloo, Westhues tries hard to foster an atmosphere safe from mobbing. He explains to his students that he is to engage them in professional discussion in the pursuit of truth, not to lord over them, nor be their friend (Gravois, 2006). This level of mobbing awareness is not always the case though, and often organizations where rights are formally protected are where mobbing most commonly occurs.

There are lessons to be learned from the messy background of professors mobbed at Southern Illinois University in Carbondale that culminated in a collective, well-prepared and factual presentation from four senior professors to the Board of Trustees. The group summarizing their collective attacks in their respective academic colleges included Dr. Jerry Becker and Dr. Joan Friedenberg. Becker is a successful professor of mathematics education at Carbondale.

In late 2003, 15 of Becker’s colleagues issued a formal complaint accusing him of bullying, buttonholing, and several other offenses. They concluded that he was toxic to the working environment of the university and wanted him removed. The complaint consumed Becker for two months as he spent nearly every evening preparing a rebuttal that led the administration to clear him of all charges. Becker’s colleagues then submitted a second complaint, this time for sexual harassment. The complaint was again successfully rebutted by Becker and the charges were dismissed. As a result of the mobbing, Becker’s office was moved to an isolated part of campus (Gravois, 2006)...

Friedenberg’s experiences were the second development of mobbing at Carbondale. It is rare that mobbing victims get redress, but with tenacity and courage she took the university to court. After five years of delay and legal wrestling, the case was settled outside of the courtroom. Friedenberg won a public apology, 50,000 dollars, and her final year’s salary free of duties up to her retirement (Westhues, 2006-2).

Friedenberg played a key role in the awareness of mobbing at Carbondale. She helped many other professors, including Becker, access the knowledge they needed to learn what was happening to them. She also gave the story of her own and colleagues mobbings to the Daily Egyptian newspaper, which published a detailed account on the front page in January 2006 (Friedenberg, 2006). It was this news that prompted The Chronicle, a favored resource for news and advice for college and university faculty members and administrators, to publish a story on mobbing in academe...

The critical incident in the first phase of workplace mobbing always varies from case to case. The victim is accused of anything from racially or sexually insensitive remarks to being careless with paperwork such as expense reports. The critical incident, in the eyes of the victim’s colleagues, confirms what they have always thought of the victim. Mobbers often feel that swift steps need to be taken to remedy the situation, usually involving administrative action (Gravois, 2006).

This first phase of workplace mobbing may be very short and hypothetically speaking, is not yet mobbing (Leymann, 1996). The second phase reveals the stigmatizing actions by colleagues with increasing isolation and petty harassment. Workplace mobbing activities may contain quite a varying number of behaviors and activities. For example, the victim begins to be left off certain lists to attend meetings or be in committees. Requests and paperwork get delayed in the works or lost entirely and the victim is assigned to meaningless tasks or undesirable work times. Work instructions are confusing and constantly change and information critical to success is withheld. These activities do not necessarily indicate aggression, but being subjected to behaviors such as the ones above on an almost daily basis over a long period of time is used to stigmatize the victim.

Aggressive manipulation used to get at a person is the main characteristic of the behaviors associated with this stage (Gravois, 2006). Management gets involved to the detriment of the victim in the third stage. At this stage, adjudication at the administrative level is initiated, most often with the desire to get rid of the problem, i.e. the victim. At this point the problem officially becomes a case.

Due to the previous stigmatization it is very easy for management to misjudge the situation and place blame on the victim. Management tends to accept and take over the ideas produced by the majority in the earlier stages, often resulting in violations of rights guaranteed by work legislation. The victim is often branded as difficult or even mentally unstable. Psychiatrists or psychologists will sometimes even misinterpret the situation as they have little training in social situations at the workplace. The victim is often judged on incorrect personality characteristics rather than environmental factors resulting in an incorrect diagnosis of the underlying problem.

This problem in identification is only cemented when management is responsible for the environment at work and refuses to take responsibility (Leymann, 1996). Finally, chances are the victim is forced to leave the organization. Whether the victim wins or loses the adjudication, whether dismissed or reinstated, the victim ultimately leaves. Expulsion from employment may easily turn into a much grimmer situation for the victim. The victim may find that they are unable to find another job due to the expulsion essentially leaving the victim completely expelled from the labor market...

This, amazingly enough, film has been known to disperse bullyin' mobs of many different constructs, e.g., Christian, Muslims, Atheist, etc.

Play it for a bullying mob, you’ll see.

What have you done today in your institution to stop work place bullying?