Some EU citizens living in Britain who decided to seek permanent residency after the Brexit vote are being told to make arrangements to leave. A number of these people are among the 31,000 EU academics currently working in UK universities. Colin Talbot says many are alarmed and some have already decided to leave – putting the expertise of Britain’s universities in serious jeopardy.

“The UK’s university sector is one of our most valuable national assets,” Prof Brian Cox, the University of Manchester academic and TV presenter, told me last week. He argued that UK higher education “is a genuinely global industry generating billions of pounds in export earnings, one of the necessary foundations of our innovation-led economy and perhaps our strongest soft power asset; political and industrial leaders from all over the world were educated here in the UK.”

Which makes it all the more strange that the government should be – whether accidentally or deliberately – undermining them. Most of the Brexit commentary about UK universities has concentrated on issues of funding, research cooperation and students. Much less attention has been paid to what keeps universities running – academic staff – and what Brexit will mean for the 30,000-plus EU academics in the UK.

I arrived at a meeting a couple of weeks ago and noticed one of my academic colleagues was visibly distressed.

When I asked what was wrong, they said they’d just had a very alarming letter from the Home Office. Having lived and worked here for more than two decades (they’re a national of another EU country) they decided to play it safe after the Brexit vote and apply for leave to remain. Big mistake.

They received a threatening letter from the Home Office saying they had no right to be here and they should “now make arrangements to leave”. The letter was obviously wrong – they had every right to be here under existing UK law – but that didn’t lessen the emotional impact for my colleague, whose whole future was suddenly thrown into uncertainty.

I had read similar stories in the press, and wondered how many other academics might be affected, so I turned to Twitter to ask for any similar experiences. The tweet I posted asking for examples was retweeted – mostly by concerned academics – over 1,000 times. People started writing to me with cases and I began digging into the issue.

The first thing that struck me was the level of fear, anger and disgust – and in some cases resignation. I have disguised individual cases – that’s because few people are willing to speak openly, such is the degree of fear about what might happen after Brexit.

The impact on individuals

Some EU academics (along with others) who have been living and working legally in the UK for years decided, after June 23, that they should try to cement their position by applying for one or other of the various routes to permanent residency. The procedures are daunting and of Kafkaesque complexity – one form runs to 85 pages and requires forms of proof that make acquiring Catholic sainthood look simple. As a result many applications are failing – but it is the form of the rejection that is causing much concern. A typical letter from the Home Office says (in part):


“As you appear to have no alternative basis of stay in the United Kingdom you should now make arrangements to leave. If you fail to make a voluntary departure a separate decision may be made at a later date to enforce your removal…”

This appears to be a fairly typical ‘prepare to leave’ letter, variations on which have been sent to “failed” applicants – even though they are currently here perfectly legally.

Even more worryingly, the decision on whether to accept or reject these applications is based on the “Nationality, Immigration and Asylum Act 2002 and Regulation 26 of the Immigration (European Economic Area) Regulations 2006”, to quote the letter again. The latter will be repealed in the Great Repeal Bill planned by the government, which could rescind any ‘right to remain’ granted under existing law and regulations.

Brian Cox sums up the situation very well when he told me:


“We have spent decades – centuries arguably – building a welcoming and open atmosphere in our universities and, crucially, presenting that image to an increasingly competitive world. We’ve been spectacularly successful; many of the worlds finest researchers and teachers have made the UK their home, in good faith. A few careless words have already damaged our carefully cultivated international reputation, however. I know of few, if any, international academics, from within or outside the EU, who are more comfortable in our country now than they were pre-referendum. This is a recipe for disaster.”

Another academic colleague said: “As an academic I’m embarrassed and ashamed of [the] UK governments’ stance on EU citizens.”

One academic told me: “the Home Office is hedging its bets because we non-UK [academics] are now effectively hostages …”. A neuroscientist from the EU at a top UK university reacted with defiance: “For what is worth, I refuse to apply for a piece of paper [leave to remain] that I don’t need and won’t be valid after Brexit – when current law says I don’t need it. It’s just a certificate. They can stick their 85-page form up their arses.”

The level of anxiety is obvious: “I’m about to submit my permanent residency application. Any pointers from the rejections you’ve seen so far? Scary times ahead…”. Another said: “as an Irish citizen I am assuming the Ireland Act will continue to provide my right to be here. But… “
A policy specialist from Oxford said “people have been turned down for administrative reasons alone. The Home Office looks for any reason to say ‘no’ at the moment.” Or as another, retired, academic puts it, this is just “inhuman bureaucracy” at work.

The impact on universities

UK universities are heavily dependent on academics from the EU. To cater for our global audience we need to attract the brightest and best and Europe is, unsurprisingly, a major source for such talent. Over 31,000 UK university academics come from the EU – sixteen percent of the total (all figures calculated from the Higher Education Statistics Agency data for 2014/15).

But this national figure underestimates just how important EU academics are to our top-rated universities. The London School of Economics has 38% EU academic staff. Other prominent London colleges – Imperial, King’s, University College London – have between a quarter and nearly a third. Oxford has 24% and Cambridge 22%. My own university, Manchester has 18% and most of the Russell Group of ‘research universities’ are in the top ranks of EU academic staff employers.
EU academics are equally important in the core subject areas that are vital to our long-term economic health. So areas like physics (26%), chemical engineering (25%), biosciences (22%), chemistry (21%) and IT (20%) are all heavily reliant on European talent.

Our global status isn’t, of course, just dependent on EU academics – UK experts are our bedrock (70%) – but the other 30% that come from the EU and the rest of the world are an important part of our global status.

Losing this talent – whether through demoralisation or deliberate design – would have catastrophic effects. As Brian Cox puts it: “Ministers must consider our global reputation before uttering platitudinous sound-bites for domestic consumption, and think much more carefully about how to ensure that the UK remains the best place in the world to educate and to be educated. [UK Universities] are everything the government claims it wants our country to become; a model for a global future.”

“The current rhetoric is the absolute opposite of what is required. The UK appears, from outside, to be increasingly unwelcoming and backward looking”.” They should be even more careful about the policies they enact and the way they are implemented...

The quality and reliability of Narcissistic Supply are, therefore, of paramount importance. The more the narcissist convinces himself that his sources are perfect, grand, comprehensive, authoritative, omniscient, omnipotent, beautiful, powerful, rich, brilliant, and so on -- the better he feels. The narcissist has to idealise his Supply Sources in order to highly value the supply that he derives from them. This leads to over-valuation. The narcissist forms a fantastic picture of his sources of Narcissistic Supply.
The fall is inevitable. Disillusionment and disappointment set in. The slightest criticism, disagreement, or differences of opinion are interpreted by the narcissist as an all out assault against the foundations of his existence. The previous appraisal is sharply reversed: the same people are judged stupid who were previously deemed to possess genius, for instance.
This is the devaluation part of the cycle and it is very painful to both the narcissist and the devalued (for very different reasons, of course). The narcissist mourns the loss of a promising "investment opportunity" (Source of Narcissistic Supply). The "investment opportunity" mourns the loss of the narcissist...

https://youtu.be/KvEc0ojAWqU
Posted by Pierre-Joseph Proudhon at 11:53 AM No comments:

No black academics have worked in senior management in any British university for the last three years, according to employment records.

Figures published by the Higher Education Statistics Agency record no black academics in the elite staff category of “managers, directors and senior officials” in 2015-16 – the third year in a row that this has happened.

Among the 535 senior officials who declared their ethnicity, 510 were white, 15 were Asian and 10 were recorded as “other including mixed”. Thirty senior academics either refused or failed to record an ethnicity.

The figures also show universities employ more black staff as cleaners, receptionists or porters than as lecturers or professors.

David Lammy, the Labour MP for Tottenham and a former higher education minister, said: “This is absolutely shocking. I am appalled that higher education is so deeply unrepresentative of the country.

“Universities talk about widening participation and fair access but the complete lack of diversity in senior positions sends out an absolutely dreadful message to young people from ethnic minorities who find themselves wondering whether university is for them or not.”

More info at: https://www.theguardian.com/education/2017/jan/19/british-universities-employ-no-black-academics-in-top-roles-figures-show
Posted by Pierre-Joseph Proudhon at 11:49 AM No comments:

On page 2 of his CV the following appears:

On page 7 the same paper appears but this time it lists 'Prof' Platon Alexiou as the first author:

However, a basic search on Google using the title of the above paper reveals that Professor Ioannis Michaloudis is the only author of this paper (below). 'Prof' Platon Alexiou is not listed or described either as a 'collaborator' or a co-author... 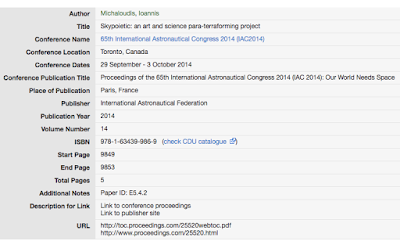 Posted by Pierre-Joseph Proudhon at 8:40 PM No comments: