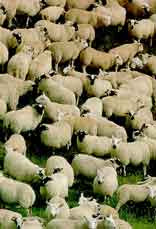 Institutions require people to do their bidding. A tobacco company must find people willing to get kids addicted to cigarettes, a school must find teachers willing to repeat the same things that they were taught, a government must find public servants willing to enforce the law.

Part of this is simply necessity. To survive, people need money; to get money, people need a job; to get a job, people need to find an existing institution. But the people in these positions don't usually see themselves as mercenaries, doing the smallest amount to avoid getting fired while retaining their own value system. Instead, they adopt the value system of the institution, pushing it even when it's not necessary for their own survival. What explains this pattern of conformance?

The most common explanation is an active process of beating people in: politicians get paid campaign contributions (legalized bribes) to meet the needs of the wealthy, employees get bonuses and penalties for meeting the needs of their employers, kids get threatened with time-outs and bad grades if they don't follow the demands of their teachers. In each case, the people are forced through a series of carrots and sticks to learn the values of the people in charge.

This is a fairly blatant form of conformance, but I suspect it's by far the least effective. Studies on punishment and rewards show that dealing them out lessens the victim's identification with the enforcer. Hitting me every time I don't do my job right may teach me how to do my job, but it's not going to make me particularly excited about it.

Indeed, punishments and rewards interfere with a much more significant effect: cognitive dissonance. Cognitive dissonance studies have found that simply by getting you to do something, you can be persuaded to agree with it. In a classic study, students asked to write an essay in favor of a certain position were found to agree more with the position than students who could write for either position. Similarly, people who pay more to eat a certain food claim to like it more than people who pay less.

The basic theory is that people work to lessen the disagreement between their beliefs and their actions and in most cases it's simply easier to change your beliefs. Quitting your job for the government is tough and painful; and who knows if you'll soon find another? So it's much easier to simply persuade yourself that you agree with the government, that you're doing the right and noble thing, that your work to earn a paycheck is really a service to mankind.

Of course, it also helps that everyone you're surrounded by feels the same way. Culture is another important influence on our beliefs. Another raft of social psychology studies find that people are willing to deny even obvious truths to fit in with a group. In the famous Asch studies on conformance, a group of confederates were seated around a table, with the subject of the experiment on the end. Everyone at the table was given a sheet with three lines, one obviously longer than the other, and then was asked to name the two lines of identical length. All of the confederates gave an obviously wrong answer and by the time the question got to the guy at the end, he ended up conforming and giving the wrong answer as well.

Similarly, spend your days in government offices where people simply take it for granted that they're doing the right thing, and you're likely to pick up that tacit assumption yourself. Such ideas are not only frequently stated, they're often the very foundation of the discussion. And foundational ideas are particularly hard to question, particularly because they're so taken for granted.

But perhaps the most important effect for conformance is simply selection. Imagine that nobody was corruptible, that all the carrots and sticks in the world couldn't get someone to do something they thought morally wrong, that they stood fast in the face of cognitive dissonance, and that their moral fiber was so strong that they were able to resist a less conscientious culture. Even then, it wouldn't make much difference. As long as there was enough variety in people and their moral values, all an organization would need to do is simply fire (or fail to promote) everyone who didn't play their game. 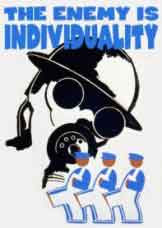 Everyone knows you climb the corporate ladder by being a "team player". Those who make a fuss or don't quite live up to expectations simply get passed over for a promotion. The result is simply that -- without any explicit pressure at all -- the people in positions of power happen to be the ones who identify with the organization's aims.

It's easy to look at the rather more flashy pieces of punishing people for failing to follow orders or living in a culture of conformity. But for those who want obedient employees, sometimes the most effective technique is simply failing to say yes.

As Professor Erik Ringmar wrote: '...academics rarely practice what they preach. Taken as a whole, my colleagues showed their repressive tendencies and their cowardice. My downfall was watched by hundreds of LSE colleagues who asked themselves only what the implications would be for themselves and their careers.'

Now put your heads down and go back to licking ass - you stupid sheep... Baa... baa... Your blind conformity makes it possible for academic managers to get away with injustice... I hope the grass you eat tastes as good as the ass you lick! And remember what happened to the Vichy Collaborators, for this is all you are...

Posted by Pierre-Joseph Proudhon at 12:58 AM