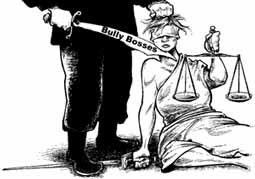 I work for a boss (Chair and now Interim Dean) who bullies, and has other faculty do the mobbing for her. She is undeniably a sociopath (and ex-local beauty queen) who manages to fool a lot of people with her high squeaky voice "Hi, guys!" and her dyed blond hair and blue eyes. Unfortunately, I also have a Provost and Chancellor who are corrupt. Grievance comittees on my campus also tend to be weak.

I am a tenured senior faculty member being mobbed, and bullied. I was just given a below post tenure rating for speaking out in a Personnel Committee against a probationary faculty member who lied on his tenure/promotion resume. He said that he had publications under review, and he did not. The Personnel Committee attacked me and said I had a "vendetta" against this guy. The Chair who gave him a rating based on his publications so instead of non-tenuring this colleague, they attacked me with a below. The Chair, now Dean wrote libel and slander about me in her summary. She said I was "unethical" and made up many lies about me for which there was no data.

I filed a grievance against her, the Dean, and Provost. All of them came to the hearing with no data to support their claims. The Chair refused to answer 10 letters of questions sent to her by my union representative. The "hearing" lasted 8 hours and the grievance process lasted 14 months. The Chancellor received the report where the Committee recommended that I receive another review and that they did not follow the university rules. By the way, the Provost (female and friends of the Chair and Dean) was included in the grievance.

The Chancellor dismissed the grievance and said that his administrators followed the rules. Also, the Chair, Dean and Provost are all grads of the university to which they are employed at. So, at this point, bullying boss-has not given me my teaching schedule for fall (not typical treatment for tenured professors).

I am speaking anonymously, here, and not mentioning my institution, not for fear of reprisal (what more could they really do to me ?!) but because I want the story to go public in a way that does NOT allow the perpetrators, abusers, and my sociopath Chair, now Interim Dean, to log on a blog and bully and mob me one more time!
Posted by Pierre-Joseph Proudhon at 9:39 PM

I have just been told by the human resources that "you refuse to be managed"... what a title!

The reason: I repeatedly correct a collection of lying managers.

And when knowing that I am on leave due to stress, the head of school (one of the mob) circulates an email to the rest of the mob with one word: "interesting"

Thanks to the data protection act, their campaign was exposed, "she is in a very powerful position" now why would any decent righteous manager make such a statement unless he is scheming to do something dishonest.

Exaggerated publications are all too common. I have seen one senior faculty and board member claiming 143 "publications" which do not bear even cursory scrutiny, let alone examining their truthfulness (http://www.ucc.ie/french/usrs/neville/). Another claimed to hold a doctorate when he did not, and received research funding on this falsely claimed qualification (http://www.indymedia.ie/article/79696#comment179159). Others have claimed "professorships" when it suited and claimed qualifications for which no evidence was advanced, even when requested. Pointing out blatant lies seems to be a self-destructive act, but someone has to do it.

These scenarios are acted out in many many universities... they are happening now as you read this blog

... at last these stories are being told in public so that people who read this blog can bear witness...

...and take action where bullying is happening in their university...

What does it say about the universities who welcome serial bullies into their midst and then protect them...

What does it say about universities who hide behind a wall of silence and denial when those of us with the courage to speak out do so....

Those who watch in silence in our universities need to have the courage to join those of us who speak out against the bullies and the bullying.

AND... our union needs to support us SERIOUSLY... not CASUALLY...

Correction from author: Last sentence should read:
I want the story to go public in a way that does NOT allow the perpetrators, abusers, and my sociopath Chair, now Interim Dean, (and colleagues) to log on a blog and bully and mob me one more time!

To the natural environment research council:

A recent report sent to you for performance measures contains lies.

Of course, there has been another dismissal. It is of my partner, from the School of Computing and IT at the University of Wolverhampton notified by letter.

The claim is gross misconduct.

Apparently, he was too critical of the bully Dean of School and the widespread malpractice which I (unusually being a non-employee) managed to witness. One of the criticisms they seem to have disliked was a message posted on the yahoo group in response to the item “Talking is not working”.

I’ll refrain from commenting for now on the ridiculous charade reported by letter as a ‘hearing’ but all the details will soon be out. Please look out for my series Pack of Wolves.

My partner, meanwhile, is too ill with stress and depression (and has been since 2005) to respond appropriately and indeed could not attend the kangaroo court himself.

Needless to say the bullying and intimidation extended to use of messages posted on this forum should not make you fearful. Keep posting and keep naming ad shaming.

In the likely event that you know these individuals, please tell them that the news is still here and will be here and else, that is, tell Mr Gordon, Sir Geoff Hampton, Prof Gipps, Mr Cutler and especially Prof (without Doctorate) Moreton, happy reading, there’s more to come here and elsewhere.

BTW: I was nearly forgetting my partner, who has been dismissed has achieved to date:

HND in BIT (commended by examination board) at Brunel University

BSc (hons) in BIT (commended by examination board) Open University

MPhil in Computation (commended by the examiner) at University of Manchester

He is also studying for an MBA with good results at the moment.

A question then for the VC Caroline Gipps, why did you not take care of all these skills , or when have you ever taken care of these skills Caroline?

Since being at the University of Wolverhampton my partner has also funded all his own studies together with other conferences, except the PGCert. He has written publications and spent hundreds and hundreds of pounds on books etc. etc. etc, without presenting one receipt to Prof (without doctorate) Moreton. Since 2005, he has been without any training supported by the University and of course he pays his own professional associations membership fees included the Higher Academy which the University instead uses for validation purposes.

Another question for Caroline, is this the fairness you refer to in your speeches where you care so much for your staff, Caroline?

My partner has also been without an office since May 2006 although one was promised by Dr Bechkoum (new Head of School of Computing at Derby University) and never implemented. My partner had to receive students in the campus bar for tutorials since May 2006 as I was shocked to witness on numerous occasions.

Caroline, seriously no space for one employee, with all these qualifications, skills, qualities and passion and seriousness about his job, bullied out of his office by the Union rep in the School of IT of your University?

Anyway, too many difficult questions for now, Caroline. More to come later with the first Pack of Wolves story: Interviews for Senior Lecturer at the School of Computing and IT, University of Wolverhampton (yes, it really started that early on).

Anybody on this forum angry about the public attack and shame of the Union collusion with management at the University of Wolverhampton?

Nice to know at least that this forum’s readership extends beyond its contributors, so the bullies themselves can believe what they see now in the mirror.

Lies do not turn facts through collective agreements and wide circulations.

I was telling my mother about the lack of transparency in their investigations, the persistence in their claims despite evidence to the contrary, and their insistence on framing me. My mother who lived in a country under foreign occupation and who was detained by the occupiers without trial, simply for her views, thought that I will have a better life by being here in the UK and that I will not experience such injustice (though obviously I am not going through what she went through).

Rebecca Fairbairn is in charge of scientific misconduct rebecca.fairbairn@rcuk.ac.uk

We will continue to tell our stories until someone listens.