Incompetence: The Top of the Food Chain 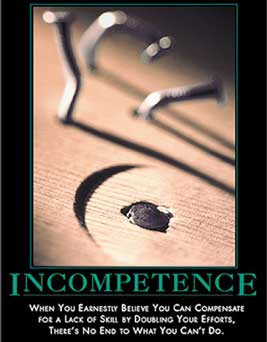 The easiest way to become incompetent is "Incompetence By Promotion". This happens when you are hired into a job that you are well suited for. Once hired, you must find a way to be promoted in order to become more incompetent. The first promotion is the hardest, but once you convince (or threaten) management into promoting you, you are well on your way to incompetence.

Once you are promoted, your intelligence increases ten-fold. You now know at least fifteen times more than the person recently promoted to your job. While this may seem good, your next promotion is far, far more exciting. You must make another promotion the most important thing in your life. For once you are promoted again, your intelligence becomes ONE HUNDRED times as great. Yes, you now know 115 times as much as the new person promoted to do your first job. See how ignorant they are. They have no idea what they are doing. Tell them so. Make sure they are doing what you think is best, because you are far, far more intelligent than they are.

This method of promotion has a cascading effect. Those promoted behind you to fill the voids left by your promotion are even less qualified than you, and have been promoted up the ladder into jobs they now have no clue how to do. Only you, with your magnificent intelligence is qualified to tell them what to do. Don't let up - your goal is to be the top. Keep those promotions coming, even if it means killing off those higher-up than you. For one day...

The top of the Food Chain. You made it. You now sit in the big leather chair, behind the huge wooden desk, in the biggest office, with the nicest view. How smart are you? Your intelligence can no longer be compared to those below you. This level of intelligence has had a special term reserved for it: Incompetence. If you take time out of your important day to pay attention to what your worm-like subordinates say, you are likely to hear them describe you as such. When you tell them they are doing it wrong, when you chastise them for their asinine decisions, when you give them an order which is the *only* way to do something, they will praise your magnificence. You are the embodiment of Incompetence.

From: http://uncyclopedia.org/wiki/Incompetence
Posted by Pierre-Joseph Proudhon at 6:53 AM

I love the image! In the news recently was the story of Wu Ping and her husband Yang Wu whose life's work was the establishment of a thriving restaurant that had the misfortune to be in the centre of what became prized development land in Chongqing city in Sichuan province.

Their refusal to give up their property on the developer's terms and opposition to heavy-handed local government pressure earned them the nick-name "The Nail-House".