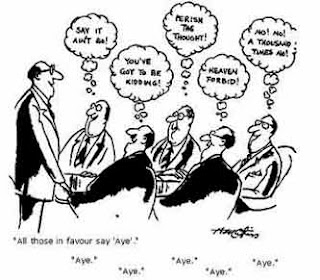 Etymology: group + -think (as in doublethink)

A pattern of thought characterized by self-deception, forced manufacture of consent, and conformity to group values and ethics.

Groupthink, a term coined by social psychologist Irving Janis (1972), occurs when a group makes faulty decisions because group pressures lead to a deterioration of “mental efficiency, reality testing, and moral judgment” (p. 9). Groups affected by groupthink ignore alternatives and tend to take irrational actions that dehumanize other groups. A group is especially vulnerable to groupthink when its members are similar in background, when the group is insulated from outside opinions, and when there are no clear rules for decision making.

2. Collective rationalization – Members discount warnings and do not reconsider their assumptions.

3. Belief in inherent morality – Members believe in the rightness of their cause and therefore ignore the ethical or moral consequences of their decisions.

5. Direct pressure on dissenters – Members are under pressure not to express arguments against any of the group’s views.

6. Self-censorship – Doubts and deviations from the perceived group consensus are not expressed.

7. Illusion of unanimity – The majority view and judgments are assumed to be unanimous.

8. Self-appointed ‘mindguards’ – Members protect the group and the leader from information that is problematic or contradictory to the group’s cohesiveness, view, and/or decisions.

When the above symptoms exist in a group that is trying to make a decision, there is a reasonable chance that groupthink will happen, although it is not necessarily so. Groupthink occurs when groups are highly cohesive and when they are under considerable pressure to make a quality decision. When pressures for unanimity seem overwhelming, members are less motivated to realistically appraise the alternative courses of action available to them. These group pressures lead to carelessness and irrational thinking since groups experiencing groupthink fail to consider all alternatives and seek to maintain unanimity. Decisions shaped by groupthink have low probability of achieving successful outcomes.

From: http://www.softpanorama.org/Skeptics/groupthink.shtml
Posted by Louise Michel at 10:11 PM